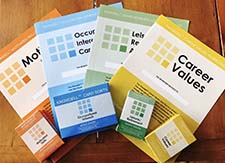 These instruments, originally developed in 1977 and were recently revised, are used throughout the world by thousands of career counselors, career coaches, career development facilitators, outplacement consultants,and job search trainers.

The Knowdell™ Career Assessments are universally perceived as non-threatening by individuals at all levels and in a wide range of occupations. This is especially so in working with "test-shy" individuals who have not been very successful in school settings. Instead of seeing the sorting process as "a test that I will probably fail," they view Card Sorts as a "game" that is fun rather than threatening.

When asked to prioritize values by making lists or ranking existing lists, clients often become bored or disengaged. This sorting process has the opposite effect - actually engaging the client-even a sleepy client on a warm day right after lunch.

The sorting technique is unlike traditional psychometric instruments in that the client is very aware of the results as he or she engages in the process of sorting the cards. Consequently, the results are never a surprise and clients agree that they accurately describe them.